Dee
Scotland, United Kingdom
I am a Holistic and Complementary Therapist. I have studied the VTCT Level 3 Diploma along with other dilpomas. The therapies that I provide are: Reflexology; Aromatherapy; Holistic Facial with Ayurvedic Tri Dosha Facial Massage; Hot and Cold Stone Therapy; Indian Head Massage; Swedish Body Massage and Fake Bake Cream Tanning. Please feel free to brose my blog which is filled with plenty of interesting information relating to holistic and complementary therapies. I have allowed ads from selected categories to be displayed on this site in order to provide the reader with the best informative experience. This should allow you to take full advantage of any deals and product information that may be on offer in relation to holistic and complementary therapies and alternative medicine.

It is said that reflexology originated about 5000 years ago in China as this is when a lot of real documentation began.
However, there is significant reason to believe that the earliest evidence of the practice of reflexology was actually found in Egypt.
As you can see from this image, the estimate for this ancient depiction is 2330 BC. 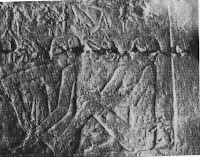 Reflexology at this time in history may not have been documented as an aid to healing but that is not to say that the Ancient Egyptians did not recognise the link between the act of applying pressure to the hands and feet; and better health or well being.
This image, shows again an ancient form of foot therapy, perhaps even what we refer to today as Reflexology; although maybe not quite as sophisticated in ancient times as it is today.

In 1893, Sir Henry Head, a neurologist working in London became the first person to describe the reflex signs of disease, proving that any disturbance of internal function is quickly reflected to the outer body.

1932 Nobel Prize winner Sir Charles “Sherrington’s work on the reflex action of the nervous system greatly influenced modern physiology”. (35) His work; published in 1906 demonstrated how the nerves co-ordinate and dominate the functions of the body showing the process in which the brain, spinal cord and numerous reflex pathways control the activities of the body. He proved that the body adjusts to a stimulus through this reflex action. (5)

Dr. William Fitzgerald; also known as the Father of Reflexology, an ear, nose and throat specialist working in a London Hospital first brought the findings of his research to the attention of other professionals within his field in 1913 when he proved ‘Zone Theory’. He discovered that pressure applied to certain points on the body could provide numbness and relieve pain whilst improving the functions of the body’s organs. (6) He discovered that using peg’s on the thumbs of patients would numb the whole zone in that arm and upon furthering his research, he found that the body could be divided into 10 longitudinal zones.
Dr. Edwin Bowers; a medical critic and writer, originally investigated Dr. Fitzgerald’s claims. That was until he discovered for himself that applying pressure on the hand or foot and sticking a pin in his face on the area which corresponded to that of the applied pressure, could be done without suffering excruciating pain. Dr. Bowers went on to work with Dr. Fitzgerald to further develop this therapy and they co-authored and published ’Zone Therapy’ in 1917. (7)

Dr. Joe Shelby Riley and his wife Elizabeth Ann Riley attended one of Dr. Fitzgerald’s seminars in the early 1900s and developed a keen interest in his theory of zone therapy. They began to do their own clinical research and implemented new techniques and procedures. They worked together with a Physiotherapist named Eunice D. Ingham. (8)

Joseph Corvo is allegedly one of the world’s leading zone therapists who adopts Dr. Fitzgerald’s theory and is in practice today. He has worked on some of the most high profile clients from the film and media industry as well as politicians and even royalty. It is said that Princess Diana received three treatments each week from Joseph Corvo. He also authored seven zone therapy books including ’Healing with Color Zone Therapy’ and ’Natural Face Lift’. (9)

Eunice D. Ingham; a physical therapist who worked with Dr Riley, closely watched and actively practised the findings of the new development of zone therapy. In the early 1930s, she started to develop her theory that each zone contained reflexes which match that of the organs of the body and could be mapped as such. Eunice determined that the reflexes on the feet could be traced exactly to the organs of the body. (8)(10) Eunice found that a stimulating effect on the body can be achieved through alternating pressure; this further developing the theory of Dr. Fitzgerald who believed that this would cause a numbing effect. She went on to travel and teach her methods and introduced reflexology to the public.

In the 1950s, Eunice and her sister set up the International Institute of Reflexology with the help of her nephew Dwight Byers who continued to teach her theories after her death on December 10th 1974. (11) Dwight; now the President of the International Institute of Reflexology, continues to research and develop reflexology techniques. His book ’Better Health with Foot Reflexology’ is the primary textbook for the institutes’ training courses. (32)

It is said that Hanne Marquardt is “probably the most well known and experienced reflexologist in Europe today” (http://www.fdz.dk/fdznet/rien2000/keynote.asp). She distributes knowledge about this therapy and the theory behind it throughout Europe. She has “developed and refined reflexology from the original theories by Eunice Ingham” (http://www.fdz.dk/fdznet/rien2000/keynote.asp). As well as having lead a workshop on basic techniques, she has also founded a network of schools across Germany.(12)
Doreen Bailey was a former student of Eunice Ingham who returned to England from America in 1966 and became the pioneer of reflexology in England. (13)

Ann Gillanders is a world renowned reflexology practitioner, teacher and author. Her School of Reflexology was founded in 1985 and her books have been translated into seventeen different languages. (14)

“Anthony Porter, a qualified remedial masseur first began using reflexology in 1972, and from 1980 until 1990 was the European Director of the International Institute of Reflexology” (http://www.reflexology-usa.net/art.htm). He teaches advanced reflexology techniques internationally and his techniques have been medically acknowledged as being extremely effective. (15)
Reflex Zone Therapy

Reflex Zone Therapy was founded by Dr. William Fitzgerald in the United States in the 1800s.
It is a type of massage therapy that focuses on the feet and is based on the idea that all nerves begin on the foot and travel up the body.

The belief is that the body consists of 10 equal vertical zones and by stimulating a certain zone on the foot, balance can be achieved throughout the whole zone.

One of the ways that this therapy can work is due to the release of endorphins from the brain.

Endorphins are the body’s natural pain reliever and will reduce the intensity of pain as well as encouraging a ‘feel good’ effect.